In New York City, a sea of skyscrapers and towering buildings, it’s sometimes tough to stand out in the crowd. The Hearst Corporation with their visually stunning and environmentally exceptional Hearst Tower has achieved just that while using steel to put it’s best environmental footprint forward. 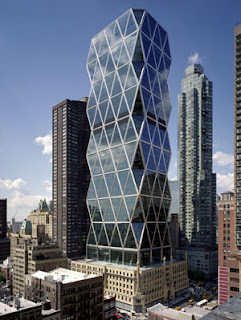 Open since 2006, the tower utilizes a unique approach by preserving its original six story base from 1928. The additional 40 stories were built in an uncommon triangular framing pattern known as a diagrid and used 9,500 metric tons of structural, recycled steel.

“Steel was the most appropriate building material for this type of construction,” explained Lou Nowikas, Director of Operations, Real Estate and Facilities Planning, Hearst Corporation. “Hearst Corporation has long believed that environmental stewardship goes hand in hand with business.”

Steel always has a minimum of 25 percent recycled content and is fully recyclable again at the end of its long product life. As a result, the use of recycled steel as its frame helped the tower achieve New York City’s first ever Gold LEED-certified skyscraper. Hearst Tower was also awarded the Emporis Skyscraper Award as the Best Skyscraper completed in the world in 2006.

“It was the right thing to do,” continued Nowikas when asked about the Hearst Corporation’s commitment to environmental responsibility. “Obtaining the Gold LEED rating for Hearst Tower is a significant achievement and it proved that it was possible for an office building of this magnitude to be ‘green.’ We wanted to set a much higher standard for green building. The Tower has reduced pollution in New York City and increased conservation of the City’s water and electricity.”

The Hearst Tower was the first skyscraper to break ground post 9/11 and is now home to some the media conglomerate’s numerous publications including Cosmopolitan, Esquire, and Good Housekeeping.

“The commitment that we made with Hearst Tower speaks volumes about what we believe as a company and how much we value our employees and our environment,” said Nowikas. “Many people doubted that we would be able to build a Gold LEED-certified skyscraper, but we are proud that we have been able to show others that it’s possible.”

Update: The Hearst Tower has since been upgraded to Platinum status.

Archive: Response to Aluminum vs. Steel Recycling by 1800Recycle